On Monday, April 8th Mike visited with over 100 eight graders at the Tiverton Middle School in Tiverton, RI to kick off Reading Week.  Mike taught the students the finer points of creating a story, making interesting characters, challenging settings, the importance of an outline and plot points and of course editing, preaching his Four-Pass Editing process. 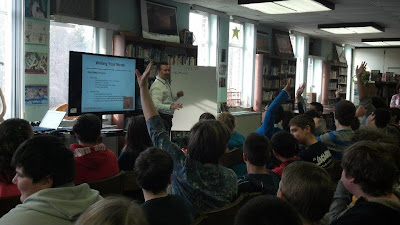 In all, a great day for everyone! 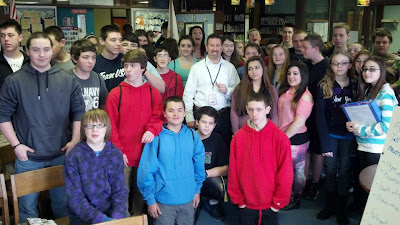 Posted by The-Overlords.com at 3:51 PM No comments:

Writing From an Editor's Point of View

In my writing career I have been fortunate to work with some very talented people.  As all authors know, every writer needs a great editor and I'm lucky to have Laura Vadney in my corner.  I virtually met Laura back in 2005 -- we still have not met fact to face since I live in Rhode Island and she hails from Memphis, TN -- and she has helped edit my Overlords fantasy series.  Three books later and more red lines than I care to share, we have put together a wonderful, entertaining series.  I'm incredibly grateful for her insights and help, and how she takes my words and makes them sound that much better.  Recently, I asked her to give the editor's perspective on writing.  Here's what she has to say:

How I Got into This

I became an editor by accident.  When running a personal ad on Match.com, I received a strange reply from a woman who was breaking up with her husband.  He was moving to Memphis and she picked me out for him.  Long story short, they got back together and we three all became friends.  One of their interests was publishing novels for first time writers and they had formed a small publishing company to pursue that goal.  If I recall the conversation accurately, one day the husband asked me if I would like to be an editor since I liked to read so much.  Truthfully, he knew that I was working in a public relations job that involved writing and editing a publication with a circulation of 10,000.  I also had an educational background - undergraduate degrees in zoology and psychology, as well as masters in counseling and English.

Since then I worked for their company until it closed due to the wife's death, helped them coordinate several writing conferences, and continue to work privately with authors, including Mike.

Editing can make your novel look more professional when you submit it for publication and/or get it in a reader's hands.  An editor will tell you things that your friends won't.  You pay us for honest, accurate opinions. It's almost impossible to edit your own work because the brain tends to fill in with what we expect to see, rather than what your fingers might have accidently written.
Spell checkers have cut down considerably on basic spelling errors, but it can make some really stupid substitutions on its own.  Also, depending on the age of your word processing program, it may not have the most recent information about grammatical preferences, although I still insist the past tense of dive is dove, not dived.
At the same time, the manuscript is your work.  I always say that authors can outvote editors if they feel strongly enough that something should remain that is recommended for change.  Occasionally you might want to deliberately use incorrect language to make a point or in dialogue.  Editors can help you be the best writer that you can be.

Common Improvements & What to Expect

I work on either a printed document or in a version that speaks to Word, going over the entire manuscript at least twice. Once is to look for grammar and flow issues, the second has more emphasis on plot and character development.  In either format I return to you, the author, a document with corrections noted in red and extensive notes in the margin to explain why.  I also stay in contact with you during this process if I find issues that need explaining to the reader.  Because I like to be thorough, this is not a rapid process.

Laura is one our many experts at Self Publishing Insight and can be hired to help get your manuscript publish-ready.  If you're interested in Laura's services, please contact Mike@the-overlords.com.
Posted by The-Overlords.com at 9:52 AM No comments:

Overlords fans, now that April Fool's Day has passed and we didn't make it onto the New York Times Best Seller list, it's time to get back to business.  Look for new reciprocal blog postings, an interesting author visit to the Tiverton Middle School, and much more!  And to those people who we folled yesterday -- Bazinga!!!

Posted by The-Overlords.com at 10:32 AM No comments:

Yes, if you read our newsletter article, Mike, Jon, Paul, and everyone else at Overlord Enterprises certainly do have a sense of humor!  Though we all want nothing more than to have one of The Overlords novels to hit the New York Times Best Seller's list, it has not happened just yet.  However, in the spirit of April Fool's Day, we encourage you to go to our Overlords Book Series Facebook page and enter your favorite April Fool's joke and/or share April Fool's articles/stories.  OK, now back to our original programming!  Thanks for being good sports, Overlords fans!
Posted by The-Overlords.com at 7:47 AM No comments: