Being a NECON Tweener

Last weekend I attended NECON 33, a horror writer's conference.  However, this is not your run of the mill writer's conference.  It's more like a reunion of sorts.  Several newbies have blogged about their initial experience at NECON, but I figured it was time to hear from someone that's a tweener -- nowhere near a legend and too far from being a newbie.  I first heard about NECON in 2007 from NECON lifer, Carole Whitney, and having just self-published my Overlords fantasy series I figured it would be good to hear what it's truly like being in the literary field.  I never expected this!

The first few NECONs I felt more like an outsider looking in.  I'm not a true horror fan, more sci-fi and fantasy, and didn't know any of the legends but over the years I got to know them all.  Maybe a little too well.  Now, I feel like I'm truly "in", a part of the NECON family.  It's nice to see Tom Monteleone and have him say, "Hey, Squatrito!  How have you been?" (we have a Red Sox/Orioles rivalry thing going) or Rio Youers ask "How's the knuckleball going?" when seeing him for the first time in a year. (I'm a baseball player too, if you haven't noticed!)

And at this year's inaugural Kaffeeklatsch, our semi-hungover host Matt Bechtel asked me to talk about my experiences with my Overlords eBooks to the group -- me!  I'm no longer intimidated to talk to people and have a good rapport with everyone, just ask J9. 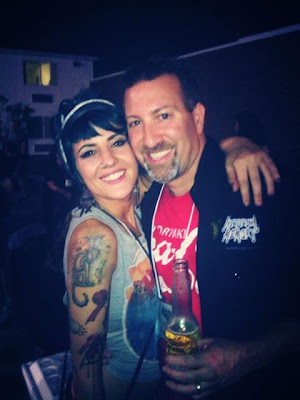 I look forward to seeing Gary Frank and hanging out with him on author's night (I also got one of the his cool shirts pimping his book), Heather Graham and chatting about life in Florida besides other things, and heading to the courtyard for saugies and "beverages", usually beer or an occasional squirrel (damn you, Dansky). 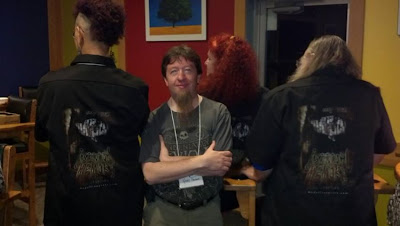 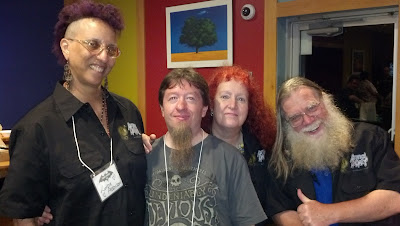 And I like meeting the newbies, like Chris Irvin, Kristin Dearborn, Trisha Wooldridge, Traci Orsi and so many others. 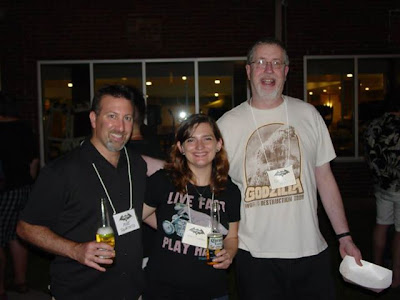 If you didn't know, I grew up in Bristol, RI and live in Tiverton, RI today, both minutes away from the Bay Point Inn, a.k.a, NECON Headquarters.  My brother used to own the Backroad Grille in Bristol and we had a couple of years of Thursday night NECON dinners there, but unfortunately the economy took him down and he had to close the place.  John and Diane Buja were most upset!  With so many people coming to Little Rhody from all over the world, I just want to let you know that you can ping me on just about anything Rhode Island (mike@the-overlords.com or friend me on Facebook).  The Booths, the best people in the whole world, are very busy planning NECON and I can certainly help with simple questions about the area so that they can focus on other things.

I also want to throw out another idea to the NECON family.  At the Town Hall meeting, Dan Booth was giving away the boccie and croquet sets since we don't have a place to hold these Olympic events.  Well, as of today, I'm offering up my yard to hold the them.  I live ten minutes from the Bay Point Inn, in a quiet neighborhood with 3/4 acre of land -- more than enough room to play.  I also own my own set of boccie balls -- I'm Italian and have the real deal, ceramic boccie balls -- but no croquet.  I'm sure that would be easy to attain. 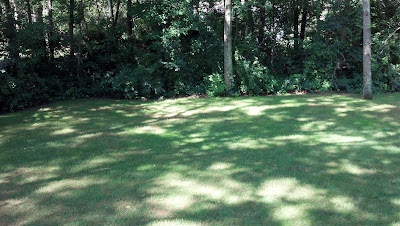 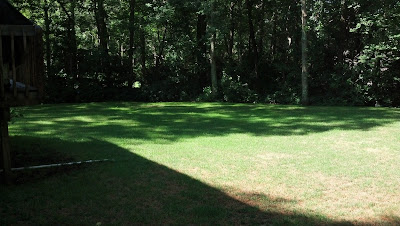 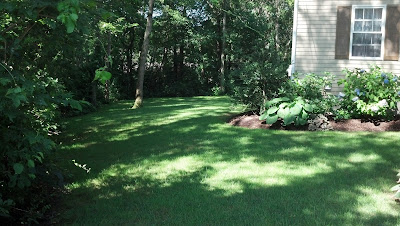 As you can see in the pictures, there's plenty of yard room, a deck for viewing the events if you don't want to play, a trampoline just in case (disclaimer, if you are over 18 and female, you must wear a bikini), and I have a trough that holds four cases of beer and ice with ease.  I just received approval from upper management, a.k.a. The Wife, who rolled her eyes, which means it's a go!  I just wanted to throw this out there since we have a year to decide.

I'm already looking forward to next year, if you can't tell.  I just wish I had more photos with my NECON buddies, I tend not to take many pictures and just interact.  A big thanks to the Booth family for their painstaking efforts to put on the best conference, or should I say, family reunion every year.  If you ever find yourself in the RI area definitely look me up and we'll do something fun.  Here's to NECON 34 -- it can't come soon enough!
Posted by The-Overlords.com at 11:26 AM 1 comment:

Over the past few months I’ve been mainly guest blogging on other people’s blogs and have posted their articles here.  It dawned on me that I’ve neglected my Overlords fans by not posting something for them.  With that in mind, here’s something for you!
Like most of you, I’m not a full time writer and have a day job to pay my bills.  Years ago, I went to college for Computer Science and find myself a Systems Engineer today.  Writing fantasy novels simply came from some dark corner of my brain.  Or to put it simply, as my wife says I’m a Libra and I need my analytical side to keep me focused during the day so that my creative side can run rampant at night.  I do hate it when she’s right!  Being an engineer pays well – much better than a starving author – so I must do what it takes to keep my family fed and keep a roof over their heads.  But wouldn’t it be great if The Overlords went mainstream with kids waiting in line at the book store at midnight for the next novel and a movie waiting in the wings?  Then I’d have enough money to write full time, something I would love to do.  Since Hollywood hasn’t come knocking at my door and the day job has taken an increased role in my life due to odd hours and travel, my writing has taken a hit.  What to do then?

It’s time to take my own advice.  At my presentations and workshops I preach to my students and would-be authors to try and write one page a day.  If you can do that, then after a year’s time you’d have yourself a novel.  Some days I write ten pages, others just one, and then sometimes I don’t write at all, but if I can average that one page a day, I’ll be close to completion.  If you’ve read my books – and I hope that you have – you’d know that I need to write a little more than one page a day.  Fantasy novels are on the average of 400+ pages and the fans simply love it!

With this thought fresh in my mind, I’m going to begin my journey to complete the final chapter of my Overlords saga.  I have an outline created, albeit with some holes, but a complete and convincing character set ready to embark on another adventure-filled journey.  I actually can’t wait to start!  I’ll be using my code to alert my fans about my progress, you know the one that looks like Bible scripture, 4:01:01, which translates to Book 4: Chapter 1: Page 1 (I’ll keep a running tally on the page count). I hope you’ll join my journey as well.

Now, for my author friends out there, how do you balance the dreaded work/writing dilemma?  Please post any comments here and be sure to Tweet and Like them on Facebook.  The more people we reach, the more we can help those who are mired in similar situations.

Until next time,
Mike
Posted by The-Overlords.com at 3:59 PM 4 comments: